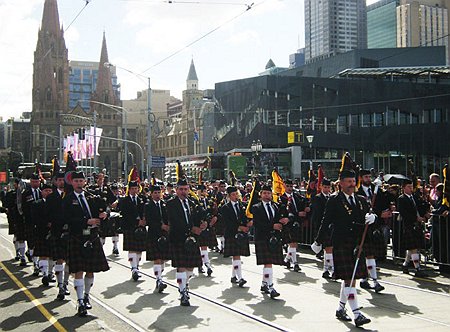 Life member of the City of Melbourne Highland Pipe Band, Ian Morison, has been recognised in the 2013 Australia Day honours for his “service to the community, particularly through contributions to pipe band performance”.

Ian’s award nomination detailed his particular areas of interest. “Ian’s contribution over many, many years has been regular, substantial and has exceeded the bounds of any of his voluntary or office bearing positions. His additional support for small, developing and geographically isolated bands has been exemplary. Ian’s helpfulness and kindness is legendary and his willingness to go beyond the requirements of his duties to assist people in the piping community has been attested to by many.”

As Drum Major of the City of Melbourne Highland Pipe Band for 33 years, Ian became the easily recognised “face” of pipe bands in Victoria. He was a dress and drill judge and later Principal of Dress and Drill for the Australian Pipe Band College. Ian’s contributions to the pipe band movement only ceased due to a severe stroke suffered in 2010.

Outside pipe bands, Ian has also been involved in the administration of Little Athletics and Little League football in his local area.

Members of the Melbourne band congratulate Ian on receiving this well-deserved recognition of his efforts. Contributions of the duration and significance such as Ian’s cannot happen without the support of family and friends and we particularly recognise Ian’s wife and co-contributor, Karen, for her wonderful assistance.

Ian is currently living in care accommodation in Geelong. His mobility remains restricted, but his health is improving. He aims to catch up with friends at the Geelong Highland Gathering on March 3rd.